A prophetic groundhog predicted this would happen. Spring sprouted on March 20, 2018, but winter refuses to melt. Unusual snowstorms are scheduled to disrupt people’s lives. Put on your earmuffs and coat—let’s shrink our perspective and take a closer look at itty-bitty pieces of cold reality.

Our last investigation examined melting snow sculptures. We also enjoyed watching winter evaporate, because we also assumed winter was cooked. Finished. Down for the count. It was supposed to be over, and that’s when a damn groundhog saw its shadow. We’re you expecting to see a pretty crocus? Forget it.

Baby, it was cold outside. Ice bubbles were frozen inside the snow’s translucent universe. Frigid moments of time waiting to be thawed.

Most sane individuals don’t care about midge flies, however, you might be baffled by their disproportionate tenacity. There are a variety of different midge flies and they thrive pretty much anywhere…except sandy deserts. Oh! Some midge flies have been scientifically proven to transfer fun and deadly diseases (sleeping sickness).

A harmless midge fly probably lives somewhere near you. These type of creatures become assimilated into our everyday reality…kind of like a mailbox or streetlamp. When was the last time you gave a streetlamp any attention? Exactly. The short film examines a typical midge fly, and it didn’t seem to mind the cold. You’d probably expect a midge fly to become a six-legged popsicle **spoilers** that doesn’t happen.

The snowscape is shaped and bullied by outside forces: sunlight, shovels, boots, dogs—these things either trample or melt delicate structures. Your neighbor’s thoughtful canine may decide to squat over a piece of claimed territory. You can imagine what happens next.

Here’s an example of something that is usually stepped on. Or whizzed on. Take your pick.

That’s a certified “ice bridge”—a frozen filament of dirty water. The structural integrity was highly questionable and it would have probably snapped if an adventurous midge fly yawned. A little bit of sunlight would have also evaporated the bridge. Fun times. You would typically see something like this portrayed in “Lord of the Rings”. A gang of fantastical misfits…running across a frozen snowscape…and that’s when a smart wizard says something a little like this, “Look! It’s the Frozen Filament of Mordor. Only a brave, tiny hobbit may cross the bridge. Our combined weight will surely snap the frozen filament. We’ll plummet into the heart of the cold unknown. ”

Wanna go on an adventure? Nuke your favorite bag of popcorn. You’ll need it.

The short film was originally titled “Snow Shine”, and you could see why.  We investigated the nature of melting snow, but not the nature of light and how it interacts with translucent pieces of ice.

Are you ready for one more? Here’s another short film. This particular film was titled “Snow Shimmer”, and you can see sunlight pulsate within a piece of snow.

Here are two photographs which are depicted in the short films.  Just in case you don’t feel like watching the films, feel free to explore the photographs. The images are not too great, however, you can see sunlight bouncing around inside a glob of ice. Kind of. 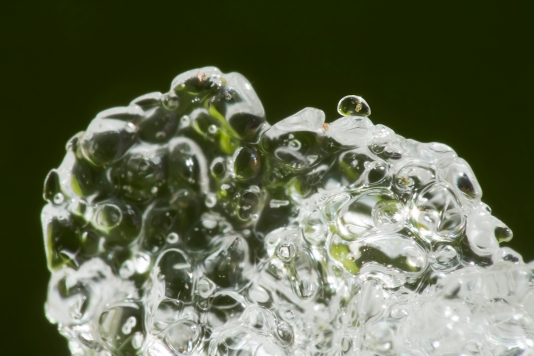 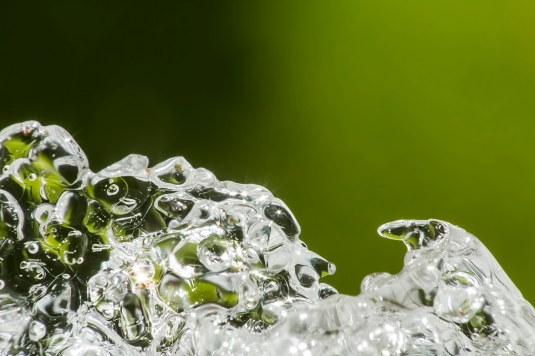 This particular photograph is a little different. Sunlight is much more apparent, and that’s because the ice was relatively clean.  Golden diffraction-like spikes make it appear more like a gem than a piece of ice or snow. Something like this would appear like an ordinary piece of snow, but its gem-like nature is revealed when we take the time to examine the microcosm. How many gems have you stepped on this winter? It’s depressing to think about (sorry).

Not all ice gems are the same, of course. Different temperatures and purities help to craft different shapes, and some of them appear to be strange or flat-out weird.

Below this paragraph is an ugly example of some kind of icy weirdo. The bulbous head balanced upon a fragile, frigid stem. Something like this can only be tolerated if it’s tiny. It would be difficult for natural forces to sculpt a rocky version, for obvious reasons. A big rocky head and a thin rocky neck wouldn’t match very well, and it sure as shit wouldn’t end very well, either.  Ice apparently doesn’t care about logic…if it’s tiny enough.

Spring has sprouted, but there’s still time to slow down and smell the roses snow. The next time you hear snow crunching underneath your feet, ask yourself this question: am I walking on snow? Or am I really just crossing a tiny ice bridge?

When imperceptible details become visible, you have learned to see.