Earth used to be ruled by gigantic things with pointy teeth. The landscape trembled, quaked, and shivered—terrible lizards chomped with their serrated maws, and the vanquished ended up inside the belly of the victorious. A BIG rock dropped from the eternal black void about 65 million years ago. The apocalyptic force razed the planet’s surface and warped the environment into a living hell. Dinosaurs exploded like firecrackers. Everything else disintegrated.

…scientists recently discovered a special volcano, and when they poured water into its protective receptacle—a dinosaur emerged from the dissolved soup. The volcano was dormant, of course.

How To Grow A Dinosaur 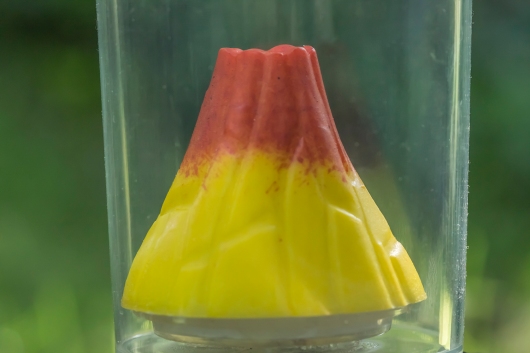 A dinosaur is living inside that volcano. Is it a wise choice to set it free? Probably not. Dinosaurs and people don’t get along. We’re just appetizers, that’s all. We owe our entire existence to a piece of rock—if the asteroid never jabbed Earth’s eye—mammals would still be pissing their fur. Dinosaurs were big…mean…hungry…and that’s about it.

Do you want to see a dinosaur? Eat a spoonful of ice cream and then smack the play button.

Yup, that’s right, a dinosaur is on the loose. Sorry.

…There’s a dinosaur on the loose…

…and its all your fault.

8 thoughts on “Grow Your Own Dinosaur”