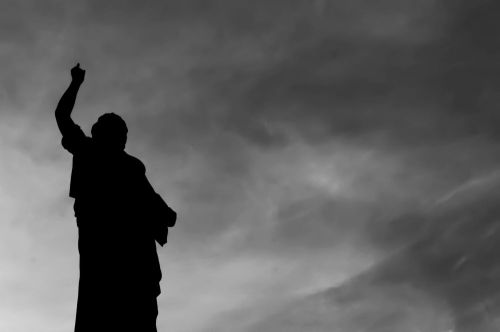 I pranced through a graveyard a few weeks ago.

Feel free to cover your eyes, my friend! You’re about to see the results of my creepy journey.

New England is famous for its graveyards. We have the displeasure of having the oldest dead bodies in ‘merica (feel free not to research that statement). No lie. I’ve witnessed headstones that were engraved hundreds of years, but I stay away from those.

Do you know why?

No lie: New England loves vampires! Can’t get enough of them. The same goes with ectoplasmic entities. There’s at least one haunted house in every town in New England—it’s a rule.

** True Story** As I pranced through the graveyard, I became abnormally hungry. You know—the type of hunger that makes your legs weak and stomach twist into a typhoon of agony. I haven’t been that hungry in a long time. So hungry, in fact, I dropped my camera bag in the middle of a row of headstones and consumed a RingDing.

**Disclaimer** I’m going to spell RingDings as one word. Many people spell Ring Dings as two words, but on the box, “RingDings” is clearly one word. If a RingDing expert, so happens to be reading this, feel free to correct me if I’m wrong. Which I’m not.

That’s right! I stuffed my face in the middle of a graveyard. For the unfortunates who don’t know what a RingDing is, allow me to educate: a RingDing is a circular, chocolate pastry filled with a cream-like substance. They usually come in a duo, wrapped in a convenient plastic wrapper. I only ate one—I’m not that much of an asshole.

And then I left.

Never eat in front of the dead. It’s risky.

Don’t ask how or why I had a RingDing in my camera bag. A stunt like that should only be pulled off by an expert—don’t blame me if you end up with melted carbohydrates alllllll over your precious glass.

My main interest in this particular graveyard journey was...I don’t know. I’ll be honest: I don’t know why I decided to venture into a graveyard. The evidence of my lack of forethought is spelled out quite clearly in my photographs. I’m usually not the type to run ‘n’ gun with a camera, but allow me to remind you—I was in a graveyard. Only fools stay in one spot too long.

Here’s a fine example of my brilliant composition. Don’t ask why I decided to photograph a handshake. 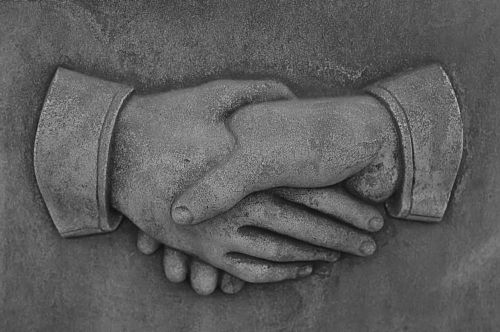 I wonder what the symbolism is supposed to mean? Perhaps the handshake represents a good-bye? Maybe someone is welcoming the recently deceased to the netherworld? It’s possible a nice business deal has been agreed upon…so many possibilities. I’ll leave this up to you to figure out.

Some graves extend into the sky like deathly monuments. I like to call them death Spires, or monument graves. Depends on my mood. 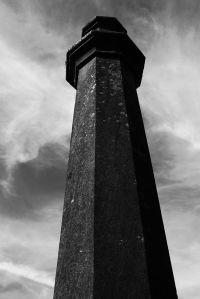 Monument graves scare me. Not in a scary sense, but more of an inquisitive one. Why the towers? Why this particular design? What the hell could these death spires mean? Maybe I shouldn’t ask too many questions. I read my healthy dose of H.P. Lovecraft—I know what happens to people who delve into the shadows of our ignorance. 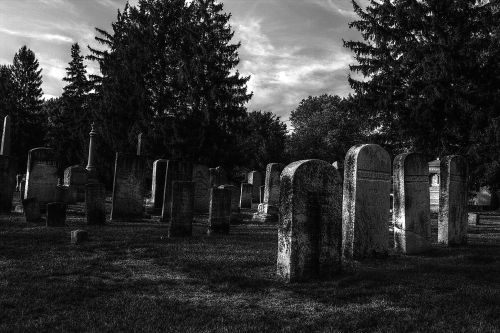 Here’s another image I took a few years ago. Again, same graveyard—different time. The small headstones are sometimes missed among the larger, ornate graves. Not much information is engraved on these particular headstones. The smallest I have personally seen was simply the letter “E” engraved on a small stone. I almost stepped on it, but I successfully rolled a dexterity check, and gracefully spun out-of-the-way.

Who knows what happens to people who trample on headstones…let alone the letter “E”. 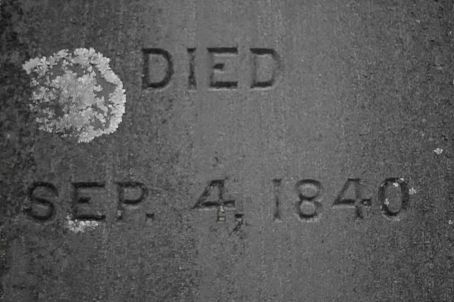 Here’s a close-up of an engraving I discovered on a random grave. There are older graves, but their engravings are severely weathered. The letters tend to be very shallow and barely eligible—a definitive testament to their timeless status. 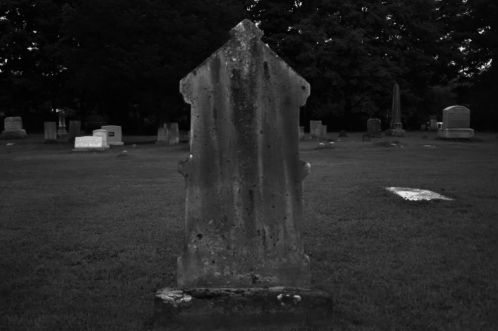 Some graves I simply stay away from. This is one of them. 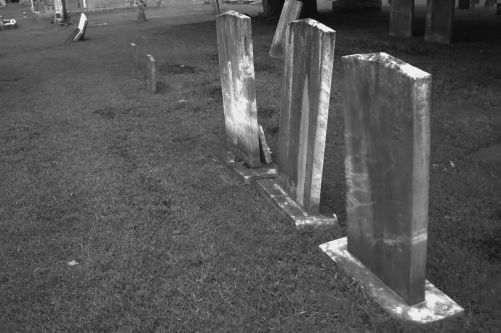 Here’s a trio of “stick graves”, as I like to call them. A stick grave is a headstone that is of medium height and is thin. Simple as that. The old graves around these parts tend to be of the stick variety. However, there’s a major design flaw: did you notice the grave that’s broken toward the left? There’s a piece that rests at an angle toward the bottom half. That’s right—there’s only so many storms that these graves can handle.

Stick graves tend to be targeted by desecrating vandals. I’ve seen plenty of graves that have been kicked over, or headstones that have been purposely broken in half. I think that’s why the graves became more massive as time went on. Or maybe it’s to weight down the ectoplasmic entity that resides underneath? I’ll leave that up to you to decide. 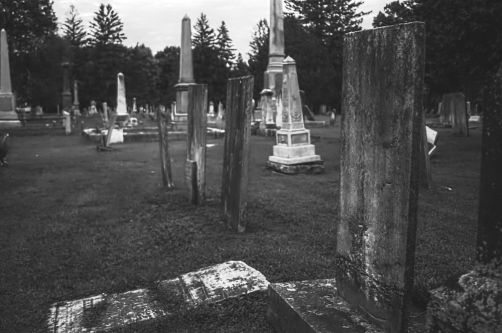 This image is a grab-bag of gravestones. We have some stick graves, monument graves, land graves—all sorts of morbid structures. I find it strange how there are so many different types of graves in such a small area.  In the end: I suppose the land graves will last the longest.  Impervious to wind and being kicked over—the basic structure will outlast any free-standing grave.

(Are you counting how many times I said grave thus far? I’m not.)

**Fun Fact** This is the same graveyard I walked through when I was in middle school. The deathly shortcut shaved many minutes of travel time off my normal route, which gave me plenty of time to do nothing before first period. 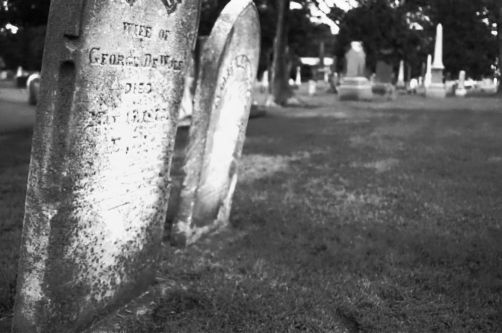 As I’ve said: New England use to have an obsession with vampires. Mass graves have been discovered with strange skeletal mutilations. Now that I think about it: I can imagine a gang of vamps with stogies in their mouths, drinking cheap beer near any free-standing monument grave that offers a ledge to sit on. Damn vampires!

Don’t get me started on ectoplasmic entities. Notice I didn’t say “ghosts”. Ghosts are for little kids and video games. Ectoplasmic entities will brown your underwear faster than you can say animated bed sheets. I know you know what I’m talking about—don’t lie.

The oak trees started to bicker and moan as the ground quaked a subtle shiver. If I stayed any longer I would have been eaten alive! Or possessed. Or both.

If you’re ever in town (Woodbury, CT), feel free to pull over on the side of the road and venture into a yard of dead people. Think you have what it takes? Yeah—I see you trembling in your British Knights—maybe you should stay home. After all, you wouldn’t want to become possessed, right? You do?!?! Wow—you’re a real sicko. 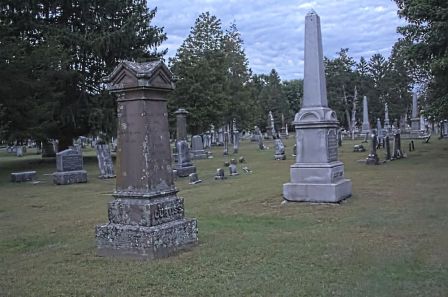 3 thoughts on “Vampires, Ghosts, and Graveyards: Beyond the Veil of Life”