I mentioned that I was going to write about this particular lens again, but never committed myself.

Until now. Prepare thyself! Grab your Canon EF 18-55 zoom lens—I’ll meet you outside.

I don’t want to simply repeat myself, so I’ll try to keep this article as fresh as possible. I’ll go over a few basics, such as:

Other than that, I’m going to explore the creative aspects of this lens. Feel free to read my first post on this particular lens—here.

First things first: Let’s take a gander at the tale of the tape.

You can find this lens for cheaper on Amazon and other retailers. Shop smart. Shop S-Mart. You got that?

A Question of Possibilities

The main question that seems to be popping up is this: Is it possible to photograph stars with the Canon EF 18-55 kit lens?

Well, my friend, if it’s possible to have your very own circus of fleas—it’s possible to image stars with a Canon kit lens. The answer is: yes! You can certainly image the night sky with the Canon EF 18-55mm.

In fact, this particular lens is the first optical-baby I had the luxury of lugging under the stars. I used this lens for at least a year, maybe more. I’m not ashamed—I still use the lens under specialized circumstances.

I’ve said it before and I’ll say it again: this lens is limited by your imagination. Period. There are naysayers out there who talk smack about this lens. Ignore them. When it comes to imaging the night sky; the Canon EF 18-55mm kit lens offers a wide range of possibilities.

I’ll list a few off the top of my head:

I’m sure there are a few that I forgot.

What are your goals? What do you want to photograph? These are the questions you need to ask yourself. If you’re creative enough—you can bend this lens to your will. I’m not saying it will be easy, but the possibilities lie within you as a photographer.

You can’t control the weather (I hope), but you sure as hell can control your focus…right?

If you want pin-point stars: spend the effort to achieve a nice focus! Don’t just crank the focus ring, glance at the camera’s LCD screen and say: Yup! Looks good to me.

Does it really look good?

Ewww! Look at those bloated stars! This is a completely out of focus image. The worst example possible of a “focused” image.

Let’s take a look at another:

How ’bout this one? Doe’s it look visually delicious? Ehhh, not really. Yes, it’s better compared to the first image, but I think we can do better:

Ahhhh, much better! The stars have lost considerable weight at a stellar rate—They on some kind of fat burner. You know what? I think we can do better: 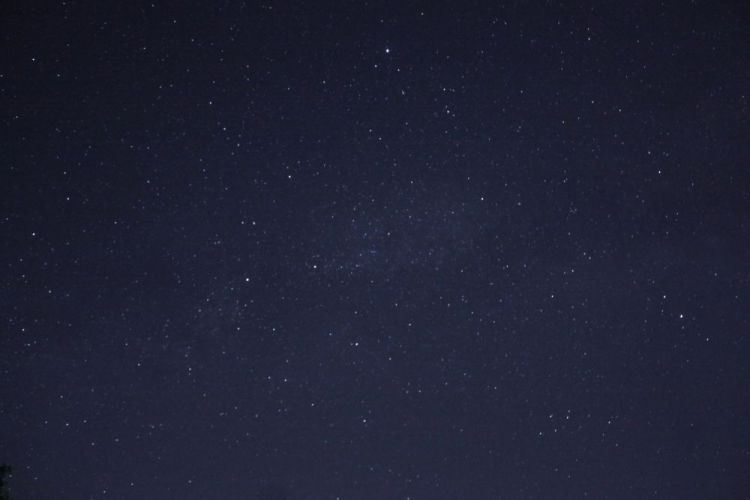 That’s about as skinny as we can get. I’ll let you decide which image is more aesthetically pleasing.

Remember: Zoom in as far your camera allows. If your stars begin to bloat under a little magnification, then re-focus. Then re-focus again. Constantly compare your exposures until you are satisfied with the results.

Don’t you dare touch the lens barrel once you acquired an optimal focus!  You will nudge the focus ring and guess what? That’s right! Start alllll over again. Hey—don’t laugh—it happens to the best of us.

Here are a few tips to achieve a katana-sharp focus:

I know it seems like a daunting process, but you’ll get used to it. You can try to eyeball the focus through the camera’s viewfinder, but keep in mind, the field of view is not bright.

If for some reason you are unable to see any stars or planets through your camera’s LCD screen AND are unable to eyeball a focus through the viewfinder—it’s still possible to focus.

This method, by far, is the most pain in the ass method to focus. It’s time consuming, but it does’ work.

Focus on a planet like Jupiter, or the brightest star that happens to be out at the time. The LCD screen on a DSLR will easily display bright objects in the night sky—use it to your advantage. Or squint. The choice is yours.

Be Careful Not to Expose Yourself

If you are using a camera that has a crop sensor—the focal length of a particular lens  increases by either 1.6x (Canon) or 1.5x (Nikon).

The brainbusting equation goes a little something like this:

When you are imaging stars, the increase in focal length matters greatly, especially when trying to figure out what exposure times to dial in. If you’re just starting out, and you use a crop sensor camera—crack open that manual and check for the exact crop factor.

So, if you’re zoomed all the way in with your Canon EF 18-55 kit lens (55mm), you’ll want to account for that increase in focal length AND the crop factor.

ISO is a judgement call you’ll have to figure out on your own. I don’t know what the environment is like, so I can’t suggest a universal ISO. Light pollution should be considered when you adjust the ISO. Try 800 and work your way up (if you can). Keep an eye on noise as well. Nobody likes noise.

As I promised: It’s time to discuss the creative aspects of the Canon EF 18-55 kit lens. In actuality, the creative aspect lies within yourself—not necessarily the lens. The power in the lens is its versatility. Once you understand the angle of view of a particular focal length, you can imagine what will fit within that particular canvas.

When you frolic around the planet, be on the look out for interesting foreground objects. You can do this during the day, it’s not necessary to wait until night. But you’ll discover scenes as you walk around by happenstance.

There could be interesting terrestrial objects all around you that you never thought to include in the sky.

I’ve walked past this fence for years. When I learned to ‘look big’, this scene jumped out at me. Normally I wouldn’t have gave a rat’s ass about this sign. But when you include a canvas of stars—things change. Especially if a sign specifically demands that you don’t loiter after dusk. 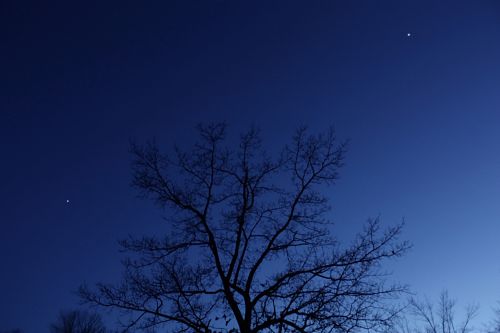 Here’s another scene that I happened across. I would of preferred if the trees along the bottom of the frame weren’t there, but besides that, I like the image. The planet toward the upper right is Venus, while the planet toward the middle left is Jupiter.

That’s what’s nice about the Canon EF 18-55mm. With a twist of the barrel, you can go wide to capture large swaths of the sky. Train yourself to ‘look big’, and scenes like this will manifest before your very eyes.

Here’s another scene that I stumbled across. I thought the angle of trees would be an interesting foreground object, although I had to take some time to get this to look like how I wanted it to. I know it may not look like I put much thought into the image, I did. Trust me. Given the area I was in, this too bad an image. The planet to the right of the moon is Jupiter.

One thing is for certain: The image would flat out suck if I hadn’t included any foreground object. Imagine a lonely moon and planet, sitting in a bland blue canvas all by themselves. It’s heart breaking just to think about.

There’s always something to include in a scenic night image. Unleash your imagination.

This basketball hoop is not far from the no loitering sign. Who doesn’t like stellar basketball?!?! Come on, you know you do as well.

If light pollution is pretty nasty where you live, image the sky before all the lights come on. There are plenty of bright objects that can be seen at or near dusk: planets, crescent moons, satellites, bright constellations.

You don’t have to wait until it’s pitch black. Light pollution tends to be less severe after midnight, but I’m sure that’s location dependent.

The bright star in the middle of the image is Vega. This was taken about a half hour after the sun went down (around twilight). I tried to get the tree toward the bottom right of the frame to point at Vega, but I didn’t have too much success.

Try to use the natural scenery that happens to be around you. If you can discover ways to include them in your scenic images, a world of possibilities opens up—even if you have to suffer through minor light pollution.

Here’s what I mean: this image was taken just before all the nights in my area turned on. Notice the reddish beam of light toward the bottom of the frame? That’s the light from a street lamp. Ain’t it lovely? This image was actually taken with a different lens (24mm prime, but the focal length is well within the Canon EF 18-55 focal range.

Sure—the image kind of sucks—but it perfectly illustrates my point that it’s possible to image stars before light pollution becomes too much of an issue.

Here’s another image taken before nightfall. The point of light in the middle of the frame is Venus. I messed up this image: I wanted Venus to be centered further below the frame, but like I said, I messed up. Please forgive me.

Don’t be shy! Go crazy! Lock ‘n’ load that camera and blast off some exposures. Who cares if some of them turn out like dog turds. Take advantage of the versatility this lens has to offer. 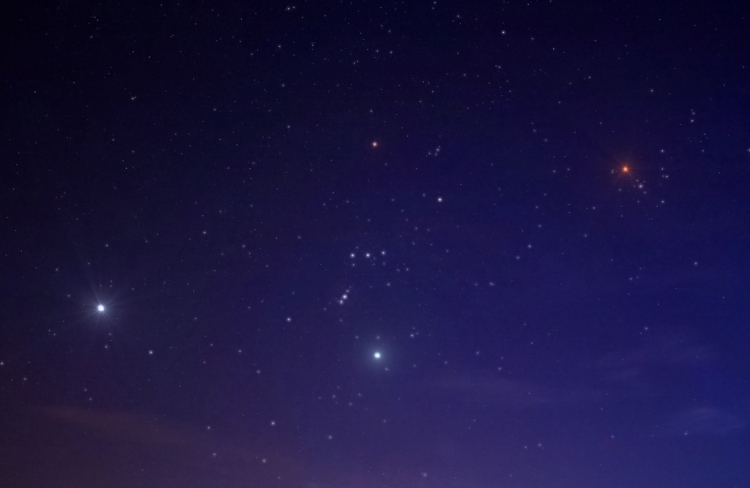 At its widest angle, you can stuff a variety of objects within the frame. Don’t mind the fancy glow that I added around the stars, Sirius, Regal, and Aldebaran. I also saturated the colors quite a bit, but that’s besides the point.

If you want to stuff constellations inside a frame, the Canon EF 18-55mm doe’s a decent job of doing just that, my friend. If you own a full frame sensor camera—your angle of view will be even wider.

Oh look at that! An unprocessed image of the Big Dipper. This particular asterism takes up a chunk of sky. The handle alone is about 10º across.  The nice thing about shooting wide is that star trails are less apparent. You can get away with a few extra seconds of exposurer and it won’t affect your image quality too much.

Notice the lack of foreground? Depending on what your goals are, the quality of your image might suffer if you only shoot the sky. This is not always the case, but be conscious of what’s in the frame.

To The Stars We Go

So, is it possible to image stars with the Canon EF 18-55 zoom lens? I hope I proved that imaging stars is indeed possible, plus more.

If you don’t already own the Canon EF 18-55mm zoom lens, I suggest purchasing one. I’m sure you can find it for less than $100 if you’re really frugal. Price wise, if you casually want image the sky—I highly suggest this lens.

My only gripe about the lens is the light-weight construction. The lens does not feel adequate in my hands. If they spent a little more effort on the mechanical quality, people wouldn’t shy away from it as much. In my opinion, Nikon managed to get it right with their version of the 18-55 kit lens. It feels more like a lens instead of a toy.

If you own the Canon EF 18-55mm kit lens and don’t use it—imaging the night sky is a convenient way to become acquainted with the lens.