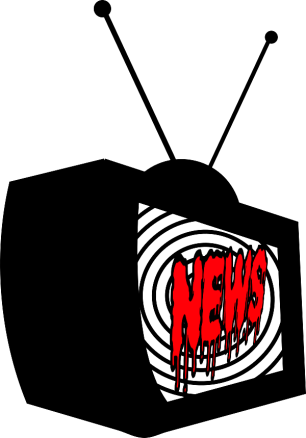 This evening someone broke into Sal’s Liquor & Smokes. Gunshots were fired, but no one was injured. Police arrived on the scene, but the suspect killed himself.

A woman was stabbed in an alley way near Bank Street around 10:31 pm. Her body was discovered by a homeless man. She remains unidentified.

Police busted a prostitution ring in downtown Alexia on January 7, 2085. A hundred people were arrested during the sting; one of which was Mayor Helbourn, who was elected a few months ago.

Some reporter is always spewing the most foul shit humanity has to offer. For some reason…we just keep listening. The past few days, I watched the news out of some…gee…I don’t know… morbid curiosity. Yeah! That’s right. And you want to know something even more fucked up? I predicted what the reporter said before any words shook their vocal chords.

I was correct 9 out of ten times; it’s not difficult to predict what’s going to be on the news in America. Here. I’ll give you the recipe:

You know the line: If it bleeds, it leads.

Listen, I’m one of the most cynical brats to walk this planet, yet, I don’t believe humanity is half as bad as it’s portrayed in the news.

Is there a rapist or terrorist stalking every street corner, waiting for the exact moment to snatch your life away?

Let me comfort your fears by saying: No one gives a shit about you. Yes, that’s right. You read that correctly.

I don’t mean to be overly crude (yes I do) but strangers roaming the world are so entwined in their own lives they don’t have time to pity your circumstance. I know we all like to believe when were strutting down the mall, everyone is eyeballing our new slacks or shiny shoes. I’m sorry to say: Everyone is worried about their own slacks and shoes, not yours.

Part of the human condition is to believe were the center of it all, when in reality, no one is.

Now that I got that out of the way; where are all these killers waiting to cut you to pieces? Not to say they don’t exist. I’d be a liar if I said otherwise. I’d also be a liar if I told you everyone is out to slice your throat. Rest easy—chances are people don’t give a shit about you.

With that being understood: Why does the news constantly try to push negative stories down our mental throat? I find it comical that those that do broadcast news, usually save a heartwarming story toward the middle or end of the…show. Sometimes it involves cat adoptions or a heavenly neighbor that saved an elderly couple from a grease fire.

Then it’s back to local murders and rapes!

Even though I’m cold-blooded and have much disdain for humanity; I’m not blind to its positive aspects. Did you know recently doctors in France successfully transplanted a synthetic heart into a 75-year-old?

Or how about China’s lunar rover, Yutu, also known as Jade Rabbit, that landed on the lunar surface on December 14, 2013?

It’s not difficult to dredge up positive stories, yet those that broadcast the news would have you believe it’s a rarity. They also want you to believe that murder is the worst of the worst; the crème de la crème when it comes to the negative cherry on top their bullshit sundae.

They fail to see the big picture; the grand shadows that loom over all of humanity. How about instead of murders, they report on how Earth is turning into a Hell Lounge due to our unabashed use of fossil fuels? After all, that’s death on a global scale! You can’t have a bigger negative cherry than that, folks! I hope it tastes delicious.

The more I watch the news, the more I realize it’s not news; it’s a way of brainwashing the masses into this false perception of who we really are The actions of a few are revered, while real issues are left to freeze in their shadows.

p.s. NBBN stands for Nothing But Bad News

One thought on “Murder and Crime: Welcome to the News”