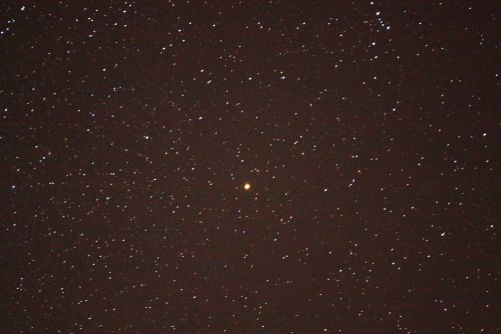 One of the first stars I’ve become acquainted with in the night sky is the red supergiant Betelgeuse, featured as the orange star centered in the image above. Located on Orion’s left shoulder, its amber glow bleeds into blackened emptiness.

Betelgeuse is one of those stars I remember seeing when I was younger, but at the time didn’t know what the hell I was looking at. This was when comet Hale-Bopp dropped by for a brief party in the inner-solar system back in the golden days of ’95. Let’s see…I was at the grand ol’ age of 10. Damn I’m getting old.

The inner-planets will become pretty toasty, indeed. Enjoy life while you can.

To get a further sense of how fat Betelgeuse is, if I were to chant abracadabra and mysteriously plop it into our solar system, it would easily consume Jupiter’s orbit, which equals on average 778,000,000 km or 483,426,785 mi. This star can’t seem to hold onto itself; Images show Betelgeuse enveloped in a gaseous cocoon that appears to be material blown off from the surface. This is common for massive stars to burp material into space during episodes of paroxysms.

To get an even further idea of how fat Betelgeuse is: remember that scene in Star Wars where Han Solo is piloting the Millennium Falcon through through an asteroid field? Imagine allllllllllll that space tucked away inside the gut of a star…and that gut belongs to Betelgeuse. Now try and sleep at night.

Betelgeuse’s is truly hauling ass through space at 30 km (18 mi ) a second. That’s 108,000 km (64,800 mi) an hour! It can travel from Earth to the moon in a handful of hours, where as it took Apollo 11 about 73 hours. Bow shocks and arcs created by the compression of gas ahead of Betelgeuse foretells its orbital motion.

This is fairly young star at the ripe age of 10,000,000 years. Compared to the suns 4.6 billion years of age, Betelgeuse is hardly out of the cosmic cradle.

It is well-known that Betelgeuse will one day blow itself apart and graffiti the cosmos with it’s plasmic intestines in an event known as a supernovae. Will it be tonight? Maybe. Will it be tomorrow? It’s possible. How ’bout a thousand years from now? Yeah that’s possible, too…then again a million years is conceivable as well.

What’s that I hear? You never seen Betelgeuse with your very own eyes? Not to worry! It’s easy to locate in the night sky. Everyone is familiar with the constellation Orion…oh, you’re not? Don’t worry! With some digital wizardry I added an arrow pointing to the star in question:

If you happen to reside in mid-northern latitudes, Orion is fairly prominent after dusk during the months of January and February. The closer it gets to March, the further south it will be in the sky. For those on or south of the equator, Orion is visible as well. First, discover Orion’s cosmically stylish belt as three bright blue gems shining in a line in the stellar heavens, and then gander upward. You’ll see an orange torch—Betelgeuse.

One thing I find interesting, which I mentioned before in another post; sunspots have been observed on the surface of Betelgeuse using interferometry. By combining data from multiple telescopes, astronomers are able to obtain resolutions that are not possible with a single telescope. I find it to be an interesting observation; it proves our sun is not the only star that undergoes that type of activity on the photosphere, bringing a familiarity to the unknown.

We’re learning more about Betelgeuse every year it seems. As technology becomes more sophisticated and telescopes more sensitive, we’re bound to unlock deep dark secrets about this orange star. In the end the more we uncover, the more we reveal about ourselves.

2 thoughts on “Orange…Fat…Oh! You Mean Betelgeuse!”